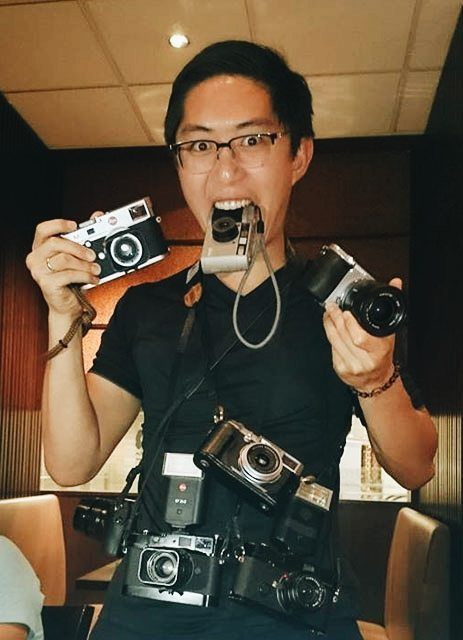 For the past few years I’ve not spent much time noticing Eric Kim. I found his blog maybe about 4 or 5 years ago and watched a video or two on him and like dancing fruit flies, Initially I found him mildly entertaining yet progressively more annoying. Luckily I’ve spent less and less time listening to people try to instruct how others should photograph; the internet has become a hive for such activities.

Yes I’ll concede the guy isn’t an idiot.. he likes to remind us he’s making 200k per year out of the suckers who think they can pay money to be better photographers. I think what he’s selling is a complete fantasy, an illusion. I remember Bruce Gilden once saying [in typical fashion] something to the effect of: I wouldn’t be dumb enough to pay for one of my own master-classes, if you have what it takes to make it you wont want people like me to hold your hand.

Firstly, while I’m not accusing Eric of being a terrible photographer, I think he talks up his game far more than is in any way healthy. I notice influences from other photographers, particularly Gilden, but to have the bottle to declare himself as not a good photographer but a great one, that’s a bit ridiculous. While he has a few interesting images I don’t see any sign of a well worked cohesive project, something well knitted together with an outlook, or even a particularly distinctive style. There really are not many street photographers who have achieved either. Perhaps in my mind his work has been badly tainted by his need to market himself.

Never before have I come across a photographer who consistently relies on ramble to speak louder and essentially carry his photographic work. He seems to constantly praise himself. The fact that he knows his talk is more influential than his photography seems to heighten his insecurities, creating a consistent need to massage his ego in public out of fear that he’ll become yesterday’s news as quickly as he became today’s. And therein seems to lie a central problem with the internet media itself.. easy come, easy go.

One thing I particularly hate is bloggers who try to [so often the same in different guises] rack off a set of tips to becoming a great photographer. Trust your gut, listen to your thoughts, get back to basics, experiment, be yourself, question yourself. If you think about it these are all things average humans do on average days without being told. Over and over and over again it’s the same formula re-jigged like some uber-white washing powder.

Has no one pointed out to these readers that in particular since the 1960s photography has been written about at a much more advanced level than this over hyped word vomit? Susan Sontag, John Berger, John Szarkowski, Kendall Walton, Peter Galassi to name but a few, not to mention many of the great photographers themselves who have written essays. It’s funny how these names will be regularly heard by many who study photography academically yet hardly receive a mention in today’s manic click feeding frenzy. Maybe its because none of the above have offered quick fix solutions for the kinds of problems they may have faced for many years of their lives. It says a lot that so many today choose the hyped up headline over the understated wisdom again, again and again.

Quick fix solutions are a lie and that’s why I’m comfortable calling Eric Kim’s blog a fraud. Just looking through the headings of some of his posts I notice “How to see.” In there lies the illusion that clicking on this post will somehow transform the existence of a wannabe photographer into a self contained fountain of visual knowledge. There’s only one way to really see in this world and that’s to experience.

“How to go viral as a photographer” is another ridiculous example of creating a false promise designed to reflexively ping the lowest common denominator mindset. “How to become a photography influencer”.. I mean does anyone really believe there is a six point answer to that question for the masses?  “Why I deleted my Instagram” ..for more attention? “Henri straps: back in stock.” Im sure Henri would be delighted you hijacked his name for marketing purposes you slippery marketing whore!

If any of the true greats in photography were dished up this kind of filth they’d fucking puke on the spot! I’m sure of it. It’s insulting to the intelligence of even an average photographer to suggest a set of words can magically fix their problems, but that’s what a good sales pitch can do. Okay, there may be a few real pearls of wisdom somewhere within these outlandish claims, but certainly for me its not worth dredging endlessly for them.

“How to be unique?” Well I didn’t find this as a specific heading [I got bored of looking] but what a question huh? The first thing about uniqueness is that to have any chance of possessing an original vision is not to habitually consume mass entertainment/marketing. The internet is just another step in homogenising not only our underlying culture but our thoughts and actions themselves. The more we band together to listen to the same propaganda at the same time [corporate advertisers, Hollywood, ego maniacal pontificators etc.] the more alike and predictable we [and specifically our neurological structures] become. Corporations love this predictability!

It could be unsettling to think this machinery has been collectively conditioning our minds since before the 1950s and is the arch enemy of any form of original vision or expression. Visionaries I’m convinced are always a product of resistance. I would go as far to say that in natural terms this unprecedented level of conditioning leads to stagnation and degeneration. Nature continually thrives on variety because there is no such a thing as  the one fits all solution.

If I was asked to attach criteria to what makes a photographer’s work good or bad, Id probably say two things before viewing any work. How and when its presented is of key importance and as with music, over saturation ruins its affect. These are two reasons that I think Eric’s work falls short of what it could be.

The social media world [especially self promoting blogs] is not for me at least a sanctuary to appreciate good work. It’s becoming like being a child in a garden overawed by the potency of too many pretty flowers at once. They all lose their context, their meaning, their allure. The flow of continuous information is brain melting and the growing restlessness of those who depend on it for the attempted preservation of their crumbling egos doesn’t make it a pleasant or even sane environment to participate within. It’s become unhealthy. It’s a shame its got to this but I think it really has. If we knew we had to climb to a hilltop to find a single unique flower, wouldn’t we genuinely appreciate that?

Photography is so often a process of repetition. The obvious thing to do in photography is to continually look for ways to copy what’s been successfully done. The tough thing is to continually seek to better know yourself in relation to your world. That’s much more the soul searcher’s response. Indeed we all copy, this is natural, but not many muster the bravery to wander off the highway with the willingness to pave their own pathways through life.